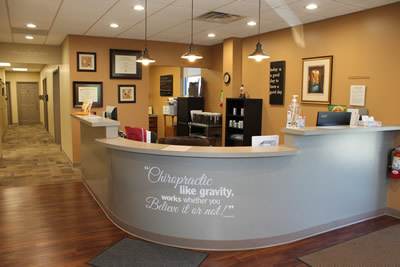 Dr. Scott Wade started practicing in 1993, after his graduation from Palmer College of Chiropractic in Davenport, Iowa. When it was time to set up his chiropractic office, he knew that he wanted to be in a community with a small town feel where you would know the people you see on the street.

He opened Canal Chiropractic and Rehab in Canal Winchester, which started off small with one doctor and one employee. As our area grew, so too did our facility. We now have eight staff members and two doctors, with Dr. Nicholas Miller joining Dr. Scott (soon to be three when Dr. Scott’s son graduates from chiropractic college!)

We see all ages, from newborns to seniors. Every one of our patients is treated like a member of our family. One patient was an infant whose mother was beside herself. Though her other three children didn’t have any problems, her fourth wasn’t eating well and was crying constantly. After three adjustments, the baby was sleeping, eating, smiling and enjoying life again.

Another patient was a person whose doctor recommended a low back surgery. A month after care, their pain was under control and they were back to their normal daily activities – no surgery necessary!

Is Your Health Really as Good as It Gets?

Too often, we have patients walk in the door who were convinced that their health was as good as it was going to be. They had been to other doctors, taken medications or even resorted to having surgery. The pain never went away, however, and their quality of life was affected. Their doctors weren’t listening to them and they had lost hope of ever living like they wanted to. After becoming a patient with us, they felt as if chiropractic was a miracle for enabling them to regain their life. MEET THE DOCTORS »

Every one of our patients receive a thorough evaluation. We’ll determine your needs, set goals with you, then work alongside you to achieve them. The first step we’ll take is to determine if you’re a chiropractic candidate and we can help. If so, you’ll be fully informed of what you can expect and the results we believe we can get for you. If there is something we don’t think we can do, we’ll be honest and let you know.

Discover how we can help you. Contact us today! We are in-network providers with most insurance plans, including Medicare.

Get In Touch With Us Today